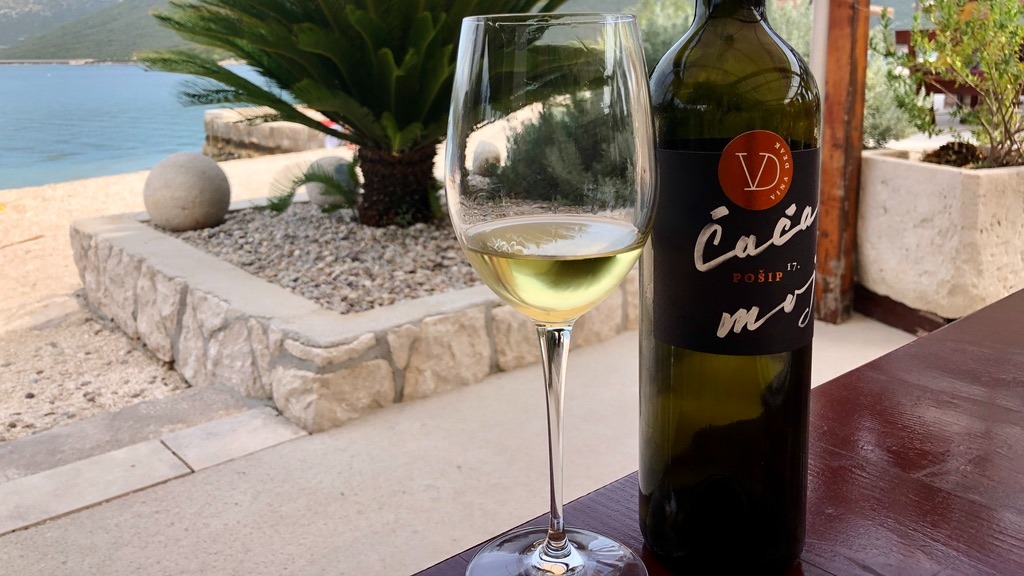 May 21 marks the second annual International Pošip Day, a day chosen to highlight this compelling white wine grape, indigenous to Croatia. Since it's relatively unknown to most people – very much a niche wine outside of Croatia – Pošip is worthy of a holiday intended to spread wider recognition of this grape.

This holiday was created by the Croatian Wine Alliance, a public-private collaboration led by the US-based Croatian Premium Wine Imports, Inc., and including organizations around the globe united in raising awareness of premium Croatian wines, including the Wines of Croatia, association within the Croatian Chamber of Commerce, Vino Dalmacije, association of winemakers in Dalmatia, Croatian National Tourist Board, and many importers and distributors in USA, Canada, Australia, and Europe, as well as Croatian wineries.

For those unfamiliar with Pošip, read on for history and background information so you can better celebrate and appreciate the white wines made from this indigenous grape.

When to drink Pošip

Here New England, folks love their seafood and Croatian white wine made from the indigenous Pošip Bijeli grape (more commonly known as simply Pošip) makes an excellent pairing with everything from oysters and haddock, to shrimp and crab. Pošip is primarily produced in the Dalmatian region of Croatia, where seafood is prominent, and our friends at Croatian Premium Wine Imports can personally attest to how well it pairs with a variety of seafoods.

The Pošip grape likely originated on the Croatian island of Korčula, which derives its name from an ancient Greek colony named Melaina Korkyra (Black Corfu). As an aside, it’s also claimed that Korčula was the birthplace of Marco Polo. The origin of the term Pošip is a bit ambiguous, with two main theories. The first is based on the elongated shape of the grape while the other theory is that the grapes once grew closely near pomegranate trees, known as šipak.

Though some believed that Pošip was brought to Korčula by ancient Greeks, DNA analysis has shown that Pošip was born from two other grapes, Bratkovina Bijela and Zlatarska Bistrica, both which are known to be indigenous to Korčula. So, it’s clear Pošip had to have been born on Korčula, and not transported by the Greeks or any other travelers.

For a lengthy time, Pošip remained relatively unknown and wasn’t intentionally grown in the vineyards on Korčula. However, during the early 1880s, a Korčula farmer, Marin Tomašić (nicknamed Caparin), from the village of Smokvica, found a wild grapevine growing in the forest, one which had resisted the harms of phylloxera. Marin was intrigued and planted some of it in his own vineyard, eventually becoming enamored with the grape, which was Pošip. He shared his find with others, who also planted it, spreading Pošip across the island.

Recent history of the Pošip grape

In 1967, Korčula became a legally protected appellation, making Pošip the first Croatian white wine to be part of such an appellation. Pošip eventually spread throughout the Dalmatian region, becoming one of the most popular white grapes in this region. In 2020, it was the ninth most planted grape in Croatia and you can find Pošip wines on most Dalmatian restaurant wine lists.

Pošip is an early ripening grape, versatile and expressive of its terroir. You can find a wide variety of expressions, including still wines, sparkling wines and dessert wines. Some Pošip wines are aged only in stainless steel while others receive some oak aging. Each winery puts their own spin on this indigenous grape and that makes these wines even more interesting.

In general, Pošip wines can range from medium to full-bodied, possessing flavors of citrus to tropical fruits, and commonly have fresh acidity. They are often aromatic and may also have mineral notes, a taste of almonds, and might even have a high alcohol content, over 14% ABV. Much will depend on the terroir of the vineyard and winemaking style, which means you should be able to find a Pošip wine which caters to your personal preferences.

It’s definitely a fine pairing with seafood, from shellfish to grilled white fish, though it would also work with light chicken and similar dishes. Or simply enjoy it on its own, while sitting outside on a fine summer day. Share it with family and friends, exposing them to a more unique wine.

Buy yourself a bottle of Pošip and revel in its delights. The Coravin Wine Shop offers a broad selection of time-honored labels as well as a collection of highly sought after and allocated bottles curated by in house wine experts and resident sommeliers.

Richard Auffrey is a freelance writer from Massachusetts with a passion for all things food and drink. He's been writing The Passionate Foodie blog for 15 years, which now encompasses over 5,000 articles. His work has also appeared in a number of newspapers and magazines over the years, including the Sampan, a Chinese/English newspaper. He's a Certified Sake Professional, a Certified Spanish Wine Education, a Certified Wine Location Specialist, and a Cavaleiro in the Confraria do Vinho do Porto. Richard has traveled to numerous wine regions across the world, from Argentina to Chile and Portugal, and is currently on a discovery trip in Croatia to learn about more Croatian wines imported by Croatian Premium Wine Imports, Inc.