Croatia, known for its beautiful maritime cities and rugged, rocky mountain nature parks, is home to four major wine regions and hundreds of varietals. Can’t picture it? Croatia is located at the crossroads of Central and Southeast Europe on the Adriatic Sea. It borders Slovenia, Hungary, Serbia, Montenegro and Bosnia to the south, then shares a maritime border with Italy. The city of Dubrovnik, Croatia, was the main filming location for King’s Landing – a fictional city in the Game of Thrones television series that is home of the Iron Throne and Red Keep.

Now that we’ve been properly transported to this magical land, let’s talk about the wine regions. There are four major wine regions of Croatia:

Each region produces a mix of whites and reds – we’ll get into each of those below. And, while Croatia doesn’t crack the top 20 countries in terms of wine production, it comes in around #22 with almost 170 million liters produced per year (Source: Wine Folly, 2015). For comparison, Italy produced almost 5 billion liters in 2015 (1.3 million gallons). In any event, that’s a whole lot of wine.

Croatian wine from Dalmatia is very distinct thanks to the region's unique climate and terrain. The most notable white wines according to our friends at Croatian Premium Wine are Pošip and Dubrovačka Malvazija. Pošip, which originated on the island of Korcula, is now planted throughout Dalmatia. Pošip, in its fresh, citrusy glory, pairs well with the delicious coastal cuisines of Dalmatia – think oysters, octopus, seafood risotto, salt-marinated anchovies, or green tagliatelle with shrimp. Dubrovačka Malvazija, different from the Istrian Malvazija, pairs well with similar foods thanks to its fresh taste and minerality.

The reds in Dalmatia include Babić, Plavac Mali, and Zinfandel. Babić is mostly grown in the northern part of Dalmatia while Plavac Mali and Zinfandel are both grown in southern Dalmatia and the islands. Honing in on Zinfandel, the Zinfandel of California is genetically the same plant as Primitivo in Puglia (southern Italy) and Crljenak Kastelanksi in Croatia, making Croatia its origin.

Plavac Mali is an indigenous red variety, with Zinfandel being one of its parents. It’s the most planted red grape variety in Croatia and the best known appellations include Dingač, Postup and Mili on the Pelješac peninsula, Komarna in Neretva County,  Ivan Dolac on the island of Hvar, and Murvica on the island of Brač. “These are extreme positions with steep slopes where the grapes receive triple insolation – directly from the sun, reflection from the sea, and from the stony ground,” said Siniša Lasan, a three-time Croatian National Sommelier Champion, wine judge for Decanter, and a head sommelier for Rixos Libertas Hotel in Dubrovnik.

“Consequently, Plavac Mali grapes build up a lot of sugar which results in very rich and full-bodied wines. Typical notes of Plavac Mali include very ripe, jammy dried fruits such as sour cherry, plums, prunes, raisins, figs, and carob with a terroir-driven touch of Mediterranean herbs. It is often aged in oak barrels, which contribute aromas of vanilla, sweet spices such as cinnamon and cloves, cocoa and mocha. Aged Plavac Mali displays aromas of leather, tobacco and has a savory quality with a lingering aftertaste. It is a bold red wine with strong tannic structure and warming alcohol sensation. It is best enjoyed at 16°-18°C with red meat and venison.”

In case you’re planning a trip to Croatia, next on your road trip should be the northwest region of Istria. Istria is known for whites like Istarska Malvazija and Žlahtina, then reds like Teran and Sansigot. For food, the truffle shines bright in Istria and, just like the southern region of Dalmatia, expect a lot of seafood dishes as well as air-cured ham (pršut), sweet fritule (doughnut balls), and savory meat dishes. Spend some time in this region and you might start to feel like you’re actually in neighboring Italy. In fact, in the last few hundred years, Istria frequently switched rulers – it was part of the Austro-Hungarian empire for while before it became a part of Italy between the two World Wars, after which it was returned back to its Slavic family. Nonetheless, both the Italian and Croatian languages are intermittently spoken in town squares.

“The most well-known white in this region, Istarska Malvazija, is a light and crisp white wine best served chilled and served with seafood,” said Mirena Bagur, co-founder of Croatian Premium Wine Imports. “For reds from Istria, one always thinks first of a Teran. It’s a relatively light red that can be fresh and spicy, particularly if grown in the coastal vineyards, or medium-bodied and bolder,  if growing inland on higher elevations.  Both Malvazija and Teran pair well with meats and pastas, particularly with truffles from this area.” 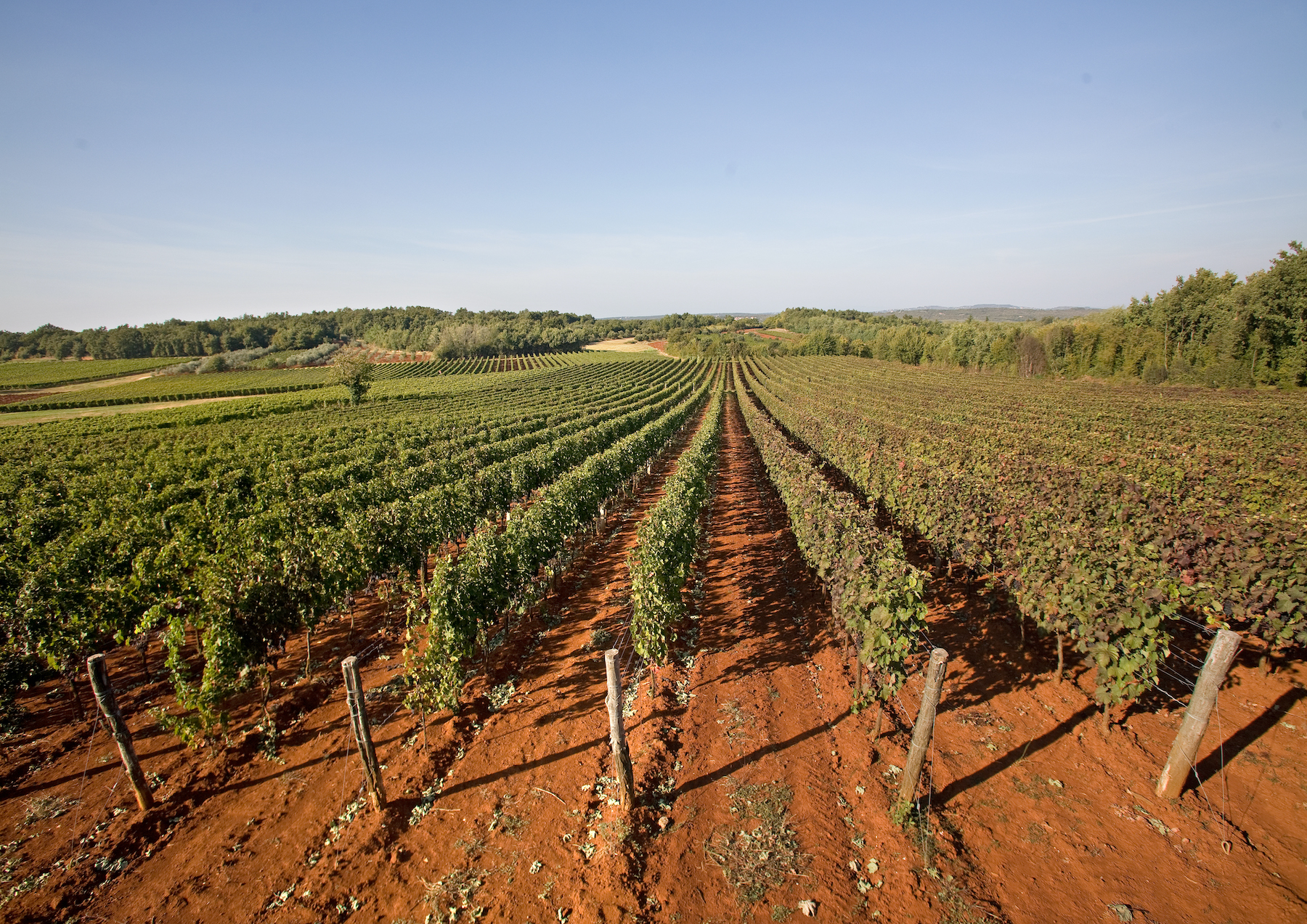 Next on our grand tour of Croatia are the Croatian Uplands located in the northern part of the country. This wine region boasts a dry, light and lively white called Pušipel. It has herbal notes and yellow-green hue. For food, our experts from Croatian Premium Wine suggest pairing Pušipel with fish, white meat, risotto, and pasta with light cheese-based sauces.

The most common  reds from the Croatian Uplands are Pinot Noir and Portugizec. “There are a variety of American foods that pair with Croatian Upland reds such as Cajun and Creole cuisines – dishes like jambalaya, shrimp and grits, and gumbo,” said Lauren Mowery, the Contributing Travel Editor for Wine Enthusiast magazine. “The fleshy red fruits, hints of herbs, and touch of black pepper in a red like Blauer Portugieser can stand up to the richness and savory spice flavors of these dishes, while lending a sweep of freshness on the finish.”  Mowery, @ChasingtheVine on Instagram, has explored Croatia's wine regions from top to bottom.

The final Croatian wine region on our trip around the country is Slavonia and Danube – located in the northeast part of Croatia. Unlike the coastal regions of Istria and Dalmatia, this region is characterized by cool continental weather and undulating hills, sprawling plains, and fertile river basins.

One of the unique whites coming out of this part of the world is Graševina – a dry, straw-yellow wine with its grassy aroma and bright acidity. “This variety is more commonly found under its Austrian name, Welschriesling,” said Dr. Matthew Horkey, cofounder of Exotic Wine Travel and co-author of Cracking Croatian Wine: A Visitor-Friendly Guide.  He adds, “Graševina is a workhorse grape producing everything from sparkling, to dry, to sweet wines.”

The top reds in this region are made from Cabernet Sauvignon, Merlot, Cabernet Franc, and Syrah. There are some beautiful reds made from Frankovka (Blaufränkisch), Zweigelt, and Pinot Noir too. The reds tend to be plush and fruity. Thanks to the true continental climate and long ripening season, the alcohol levels remain modest.

If you enjoyed this brief trip to Croatia, you’ll definitely be interested in our upcoming event with Croatian Premium Wine, “Timeless in Dubrovnik:  History and Wine.” Join us Sunday, April 18, 2021 at 3:00PM EST.

Event details: Join Coravin founder, Greg Lambrecht, and Mirena Bagur, founder of Croatian Premium Wine Imports, for an informative session on the benefits of extending that special bottle of wine across a few occasions. Ksenija Matić, WSET3 and wine judge, will join live from Dubrovnik to taste the wines and present her hometown’s history, wine and people.

Registration: Sign up here to receive a discount code for the wines, and you will also receive a complimentary Coravin Pivot.